X
X
Back to the top
X

A BRIEF HISTORY OF LEATHER – THE MATERIAL OF KINGS

The history of leather has been rich and colorful. It is one of the oldest materials in the history of humanity, used for clothing and tools. Our ancient ancestors used leather made from animal hides to protect their bodies. No doubt, it has played a pivotal role in developing civilization and is a great example of innovation and resourcefulness.

However, for centuries, leather has been an integral part of fashion and design and one of the earliest and valuable discoveries in the world. Men in the wild hunted wild animals for food, then made clothing, footwear, and crude tents from their hides. Some of the early leather-making process, and a craft with it, is still similar today. However, the history of leather has closely tied people all around the world. But what exactly is it? Let’s delve a little deeper into this noble material.

Prior to recorded history, people used to wrap their bodies in dried animal pelts. But skin stiffing and rotting were a problem. Therefore, they discovered the methods of softening and preserving the skin. That is when leather processing began, and leather was born. Initially, the hides or skins were probably dried in the air and sunlight. Then they had been soaked in water and dried over a fire. However, later on, soaking twigs, barks and leaving the skin in the water process developed, which helped hides in preserving them. As archeologists have found, primitive man used the skins of hunted animals as a source of food and apparel. Primarily, leather comes from the hide or skin of any mammal, bird, fish, or reptile. Then the animal hides go in the tanning process in which tanning agents react with the collagen in the skin, making them waterproof, stable, and unable to decay.

History Of Leather – Back To Its Origin:

Leather was one of the oldest human artifacts. However, leather processing dates back to the dawn of time. In the prehistoric era, man sought protection from the weather, but soon they realized that the animals they ate could not only be used for food but also be served as clothing and huts. According to researchers, the earliest evidence of leather work, including hide scarping, dates back about 400,000 years ago. At that time, Neanderthals covered their bodies with hair and didn’t need clothes. However, the hunters began taking the skins from the animals they had just killed so they could use them as sunshades. They put the hides on branches and took them during hunting seasons. These skins only lasted a short time because of rain and sunshine alternating.

Suddenly, an unprecedented deluge occurred around 8000BC, and the season became more unusual than it had been during the Upper Paleolithic (old stone age). Rain and sunshine then became more frequent, and the cold became more important, which incited them to cover themselves to sleep. Consequently, they began losing their abundant hair after the genetic modification. So, their skin began to require protection as well. They began to hunt more frequently and tried to prolong the life of their skins.

The book of Hittites stated that, around 2200 BC, a shepherd from Sinai slaughtered his goat, took off the skin, and defatted it using clay and salt. Unfortunately, a gust of wind swept away the skin. It fell into the rock hollow, filled with water that had partially dissolved alum salts. The alum in water favored the action of salt presence on the skin, which saves skin from decomposing. A month later, when the shepherd was passed by the same rock, he found his goat’s skin. Unlike usual, the skin turned white but didn’t rot. After seeing it, he was amazed. He picked it up, dried it again, and put it on.

After seeing the skin’s success, he experimented with the process again under the same circumstances; and once again, the skin didn’t decompose. He perceived that the water in this place had peculiar properties and was loaded with salt, which he named “Rock Salt”. That’s how he became the first tanner in history. It then became the specialty of Hittites, the merchants, who then sold it by caravans between different regions. Over almost 1000 years, the Hittites were the only ones capable of tanning leather. It was a feature that greatly contributed to their prosperity. Many historians believe that leather work came into existence by chance. Yet, it’s unclear exactly how long ago vegetable tanning was invented, but it’s presumed that it was discovered by chance. 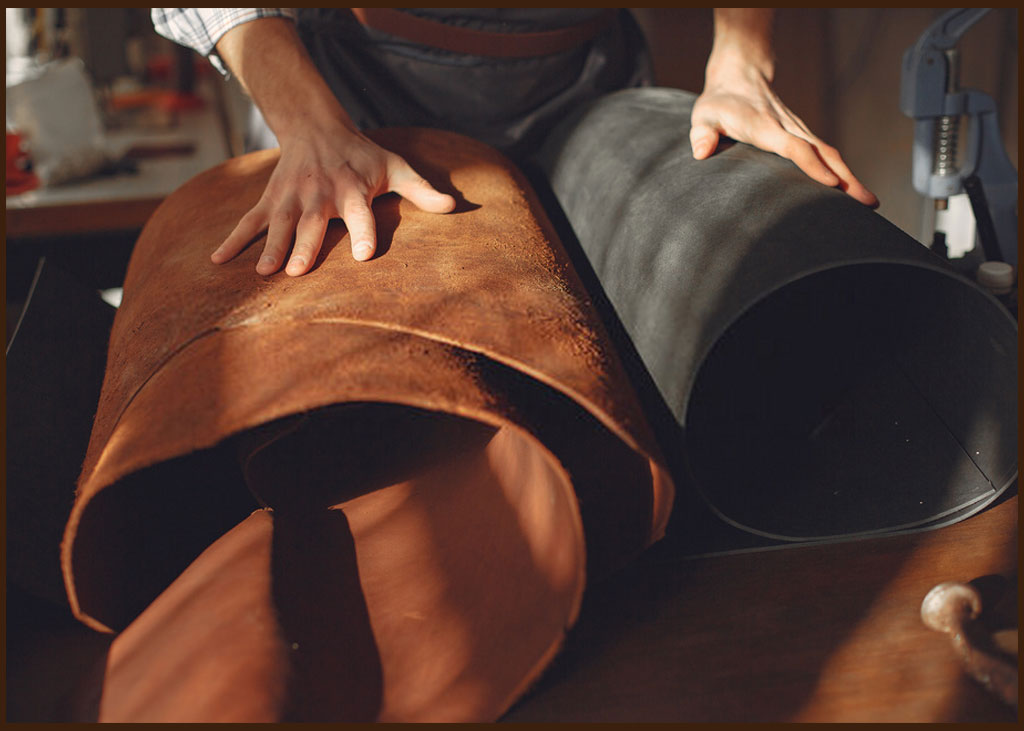 The Origin of Leather in Europe:

Sometimes industries are driven by historical reasons. The first place to understand the heart of the European leather industry is Italy, the world’s largest leather producer and still producing the finest leather in the world.

Leather production in Italy dates back to the 13th century, and there is evidence of a tannery in Pompeii ruins from 79 AD as well. Santa Croce in Florence was the first known center for Italian leather. Today, it still boasts many tanneries and is the perfect place to purchase fine leather goods. Moreover, Italian leather uses the strongest part of the hide known as full-grain. In addition to lasting the longest, full-grain leather is not only the most durable but also the most aesthetically pleasing material. There is another modern manufacturing resurgence in Portugal, another historic tanning center. In Portugal, tanning began in Guimaraes, Porto, and Alcanena, which are still the leather centers today. The tanning industry in Portugal dates as far back as the early 17th century. However, it flourished after the Industrial Revolution, which permitted organizations to become bigger and more economically scalable.

A focus on craftsmanship and tradition drives today’s leather clothing and accessory market to draw inspiration from historical eras. Today, fashion designers draw inspiration from history to design the leather goods of tomorrow, whether it’s rugged leather boots reminiscent of Western cowboys or vintage aviators that epitomize the decades of WWII.

Historical styles of leather fashion will always be relevant due to its ancient heritage. Meanwhile, designers are also constantly on the lookout for new and innovative ways to utilize this iconic textile. Despite it being difficult to predict future trends or fashions, leather will always have a significant presence in modern culture, regardless of its style or practicality.

If you are interested in finding out more about leather, you can visit d-ten.store

Everything is very open with a really clear clarification of the issues. It was definitely informative. Your site is very helpful. Thanks for sharing!

how can i get valtrex

where can i get viagra without a prescription

average cost of viagra in canada

tadalafil for sale from india

where to buy vermox

zoloft for sale in uk

how much is valtrex in australia

where can i buy baclofen

how to buy amoxicillin in usa

GET 15% OFF YOUR FIRST ORDER

Design, manufacture and distribute top quality leather goods to give you distinctive expression

Made To Order Leather Jackets

We use cookies on our website to give you the most relevant experience by remembering your preferences and repeat visits. By clicking “Accept All”, you consent to the use of ALL the cookies. However, you may visit "Cookie Settings" to provide a controlled consent.
Cookie SettingsAccept All
Manage consent

This website uses cookies to improve your experience while you navigate through the website. Out of these, the cookies that are categorized as necessary are stored on your browser as they are essential for the working of basic functionalities of the website. We also use third-party cookies that help us analyze and understand how you use this website. These cookies will be stored in your browser only with your consent. You also have the option to opt-out of these cookies. But opting out of some of these cookies may affect your browsing experience.
Necessary Always Enabled
Necessary cookies are absolutely essential for the website to function properly. These cookies ensure basic functionalities and security features of the website, anonymously.
Functional
Functional cookies help to perform certain functionalities like sharing the content of the website on social media platforms, collect feedbacks, and other third-party features.
Performance
Performance cookies are used to understand and analyze the key performance indexes of the website which helps in delivering a better user experience for the visitors.
Analytics
Analytical cookies are used to understand how visitors interact with the website. These cookies help provide information on metrics the number of visitors, bounce rate, traffic source, etc.
Advertisement
Advertisement cookies are used to provide visitors with relevant ads and marketing campaigns. These cookies track visitors across websites and collect information to provide customized ads.
Others
Other uncategorized cookies are those that are being analyzed and have not been classified into a category as yet.
SAVE & ACCEPT